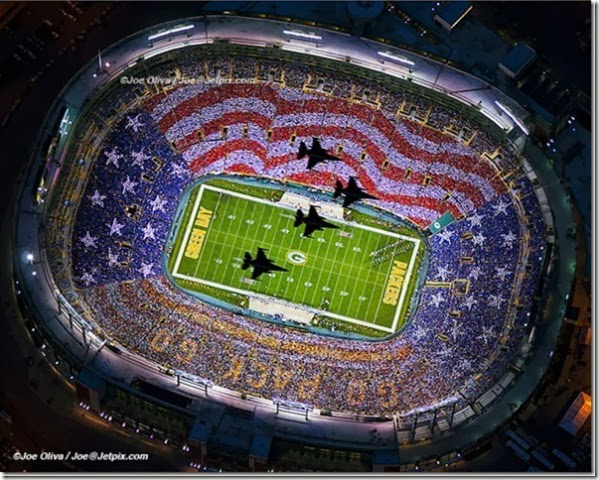 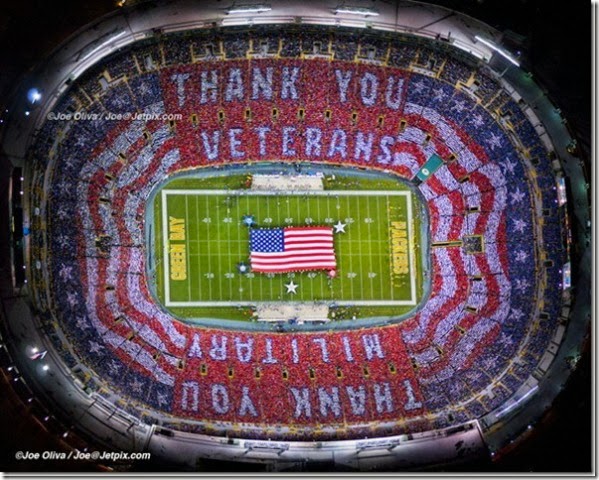 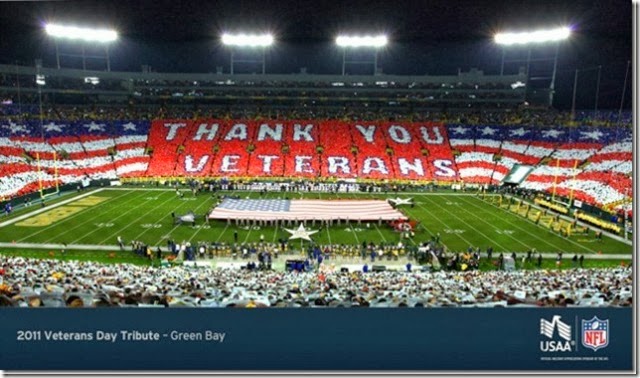 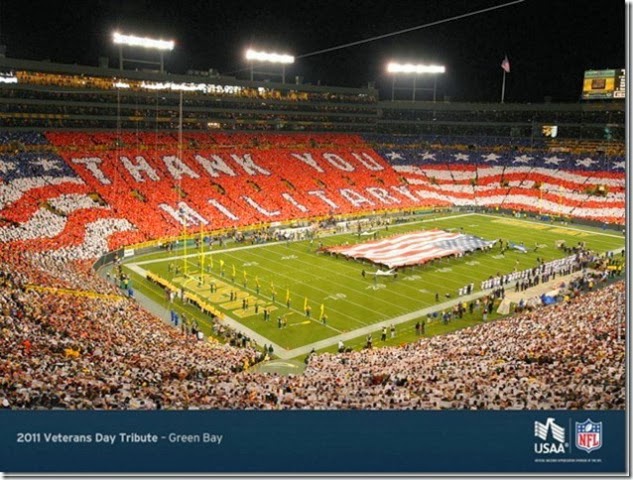 Those who attended the game said it was extremely emotional to see the entire bowl of the stadium turn red, white and blue. It took 90 workers two weeks to get all of the colored card boards mounted under each seat. Each piece of card board had eye slits in them so the fans could hold up the colored sheet and still see through the eye slits. Every seat had to have the proper card, with no mistakes, to make this happen.
Thanks to Patt and Mike Staley for sharing.

...for those of you who don't know, here's the story...
KILROY WAS HERE

He is engraved in stone in the National War Memorial in Washington, DC- back in a small alcove where very few people have seen it. For the WWII generation, this will bring back memories. For you younger folks, it's a bit of trivia that is a part of our American history. Anyone born in 1913 to about 1950, is familiar with Kilroy. No one knew why he was so well known - but everybody seemed to get into it.

So who was Kilroy?

In 1946 the American Transit Association, through its radio program, "Speak to America," sponsored a nationwide contest to find the real Kilroy, offering a prize of a real trolley car to the person who could prove himself to be the genuine article. Almost 40 men stepped forward to make that claim, but only James Kilroy from Halifax, Massachusetts, had evidence of his identity.

'Kilroy' was a 46-year old shipyard worker during the war who worked as a checker at the Fore River Shipyard in Quincy . His job was to go around and check on the number of rivets completed. Riveters were on piecework and got paid by the rivet. He would count a block of rivets and put a check mark in semi-waxed lumber chalk, so the rivets wouldn't be counted twice. When Kilroy went off duty, the riveters would erase the mark.

Later on, an off-shift inspector would come through and count the rivets a second time, resulting in double pay for the riveters.

One day Kilroy's boss called him into his office. The foreman was upset about all the wages being paid to riveters, and asked him to investigate. It was then he realized what had been going on. The tight spaces he had to crawl in to check the rivets didn't lend themselves to lugging around a paint can and brush, so Kilroy decided to stick with the waxy chalk. He continued to put his check mark on each job he inspected, but added 'KILROY WAS HERE' in king-sized letters nextto the che ck, and eventually added the sketch of the chap with the long nose peering over the fence and that became part of the Kilroy message.

Once he did that, the riveters stopped trying to wipe away his marks. Ordinarily the rivets and chalk marks would have been covered up with paint. With the war on, however, ships were leaving the Quincy Yard so fast that there wasn't time to paint them. As a result, Kilroy's inspection "trademark" was seen by thousands of servicemen who boarded the troopships the yard produced.

His message apparently rang a bell with the servicemen, because they picked it up and spread it all over Europe and the South Pacific.

Before war's end, "Kilroy" had been here, there, and everywhere on the long hauls to Berlin and Tokyo . To the troops outbound in those ships, however, he was a complete mystery; all they knew for sure was that someone named Kilroy had "been there first." As a joke, U.S. servicemen began placing the graffiti wherever they landed, claiming it was already there when they arrived.

Kilroy became the U.S. super-GI who had always "already been" wherever GIs went. It became a challenge to place the logo in the most unlikely places imaginable (it is said to be atop Mt. Everest , the Statue of Liberty , the underside of the Arc de Triomphe, and even scrawled in the dust on the moon.

As the war went on, the legend grew. Underwater demolition teams routinely sneaked ashore on Japanese-held islands in the Pacific to map the terrain for coming invasions by U.S. troops (and thus, presumably, were the first GI's there). On one occasion, however, they reported seeing enemy troops painting over the Kilroy logo!

In 1945, an outhouse was built for the exclusive use of Roosevelt, Stalin, and Churchill at the Potsdam conference. Its' first occupant was Stalin, who emerged and asked his aide (in Russian), "Who is Kilroy?"

To help prove his authenticity in 1946, James Kilroy brought along officials from the shipyard and some of the riveters. He won the trolley car, which he gave to his nine children as a Christmas gift and set it up as a playhouse in the Kilroy yard in Halifax , Massachusetts .

And The Tradition Continues...

EVEN Outside Osama Bin Laden's House!!! 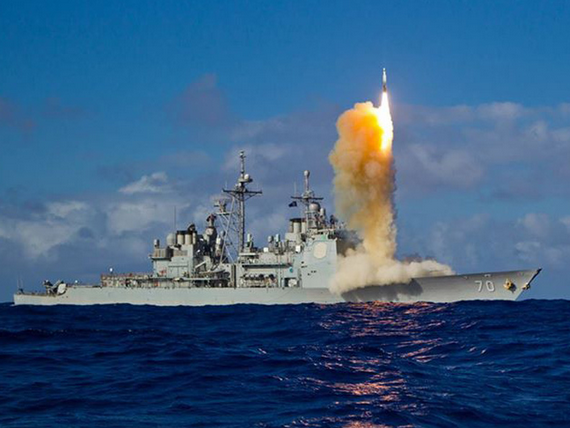 Fly-Fight-Win -- that's the United States Air Force motto adopted in 2010. If we look back to 1947, we see the unique origins of this branch of our nation's military and how it embodies that motto today.
On September 18, 1947, with this excerpt from the National Security Act of 1947, the United States Air Force was created:
In general, the United States Air Force shall include aviation forces both combat and service not otherwise assigned. It shall be organized, trained, and equipped primarily for prompt and sustained offensive and defensive air operations. The Air Force shall be responsible for the preparation of the air forces necessary for the effective prosecution of war except as otherwise assigned and, in accordance with integrated joint mobilization plans, for the expansion of the peacetime components of the Air Force to meet the needs of war.
Now, 65 years later, I can attest that they have more than fulfilled the obligations stated in their charter document. During the invasion of Iraq, the Air Force flew attack missions to enable the U.S. Military assaults (I was in the U.S. Army at the time.)
Once we transitioned into stability and support operations, they provided surveillance that was instrumental in our well-being. Their pilots were professionals and their liaisons to our armor battalion were dedicated and knowledgable.
My favorite story involves a pilot operating his F-15 at 30,000 feet providing observation to my battalion during a cordon and search in 2005. Our unit was searching a rural area of a suburb of Baghdad because we had intelligence that insurgents were assembling car bombs and other munitions for employment throughout the city.
In pitch black darkness, we found the target on a small "farm" and while exploiting the site, several insurgents fled through thick underbrush into an adjoining palm grove. We couldn't see anything due to the visibility and vegetation so we looked up and prayed and the U.S. Air Force answered!
Our pilot was using his thermal and infrared sensors and could see the people hiding in a ditch. He told us he would designate the target for us and moments later, a bright beam of infrared light lanced down pointing out exactly where the people were hiding. Our ground troops using their night vision goggles were able to maneuver exactly to the spot and apprehend the individuals for eventual prosecution in the Iraqi Court of Law.
The assistance provided by the pilot stopped a deadly insurgent operation and removed a significant threat to both Iraqi civilians and Coalition Forces.
Honoring a Legacy of Valor
It is through the Legacy of Valor campaign that we acknowledge the service and sacrifice of all veterans -- active duty and those considering a military career. We honor people like our Legacy of Valor hero Lisa Christy,  Master Sergeant, United States Air Force, Ret.
Part of a military family (Lisa's father was in the Army and her brother was also in the Air Force) Lisa joined the military to learn Russian (which she did). She served for 22 years, was in military intelligence toward the end of the Cold War, and earned the Defense Meritorious Service Medal during her career -- that's the third-highest award bestowed upon members of the U.S. Military by the Department of Defense (DOD). Now a Bradenton resident, Lisa wants our community to know that veterans represent all ages and backgrounds.
Do you have any stories about the U.S. Air Force? Please share them in the comments section below and help us spread the good word about this instrumental branch of our nation's military.
Ryan Simonson | September 18, 2013 at 12:56 am | URL: http://wp.me/p28bFy-1aj

From the MOAA Web Site

What happens when veterans transition home 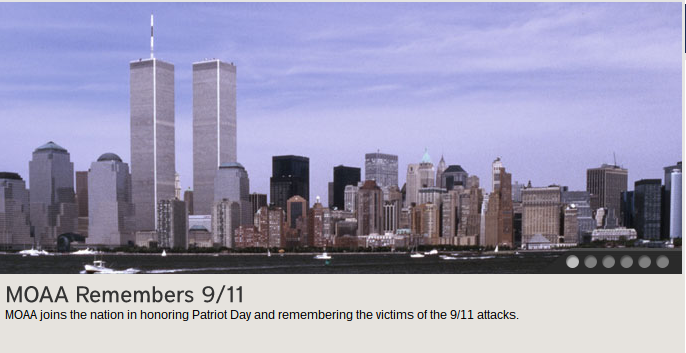