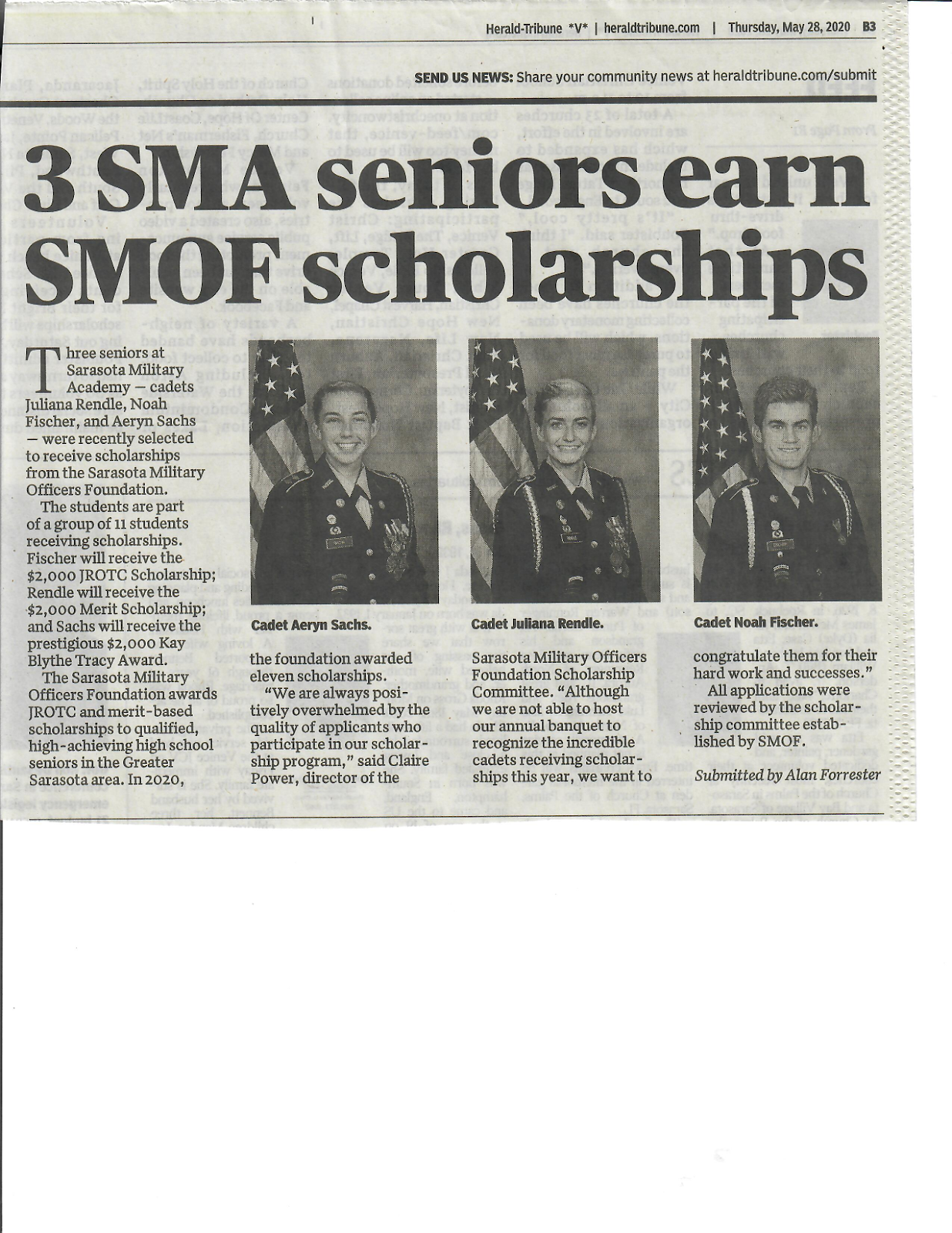 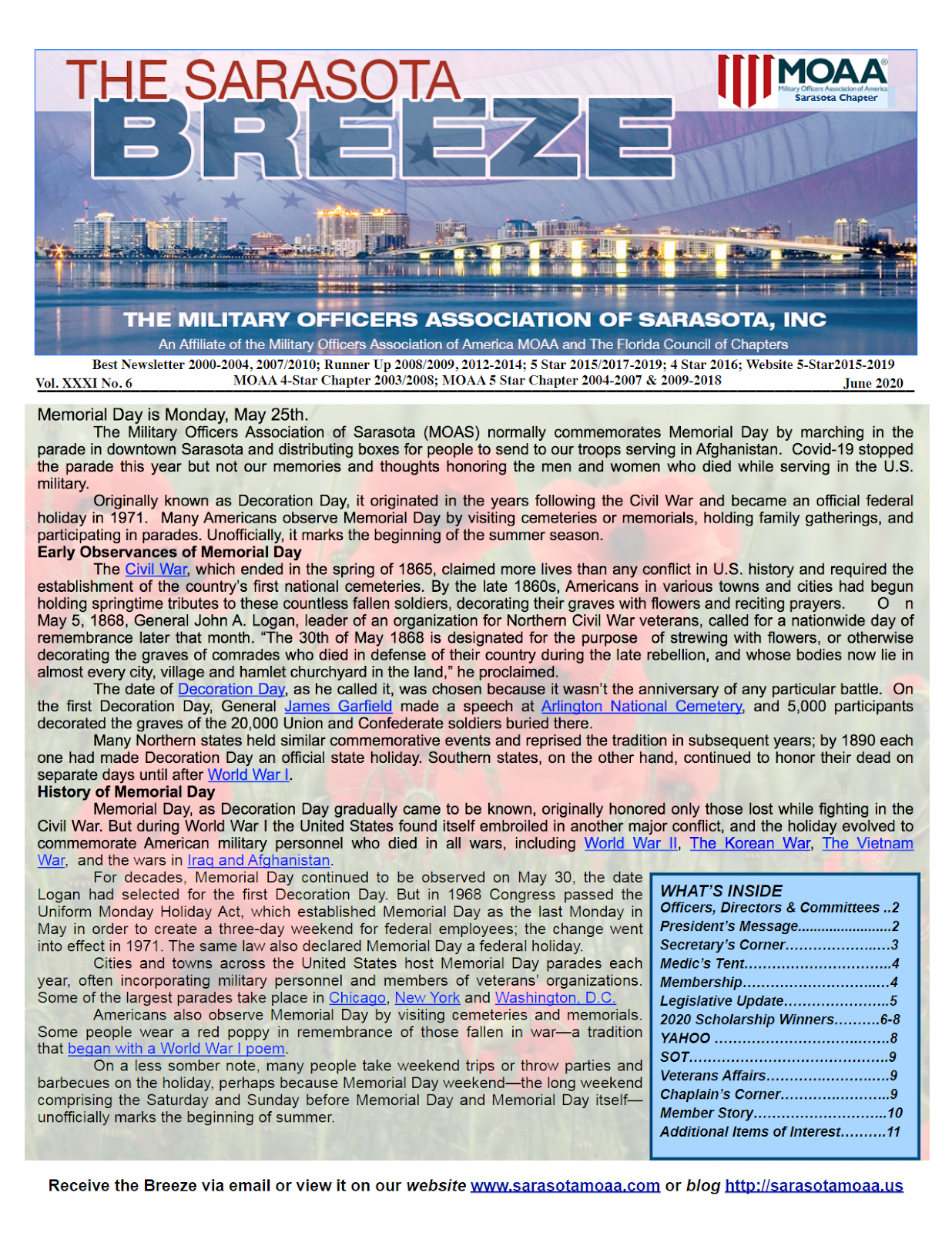 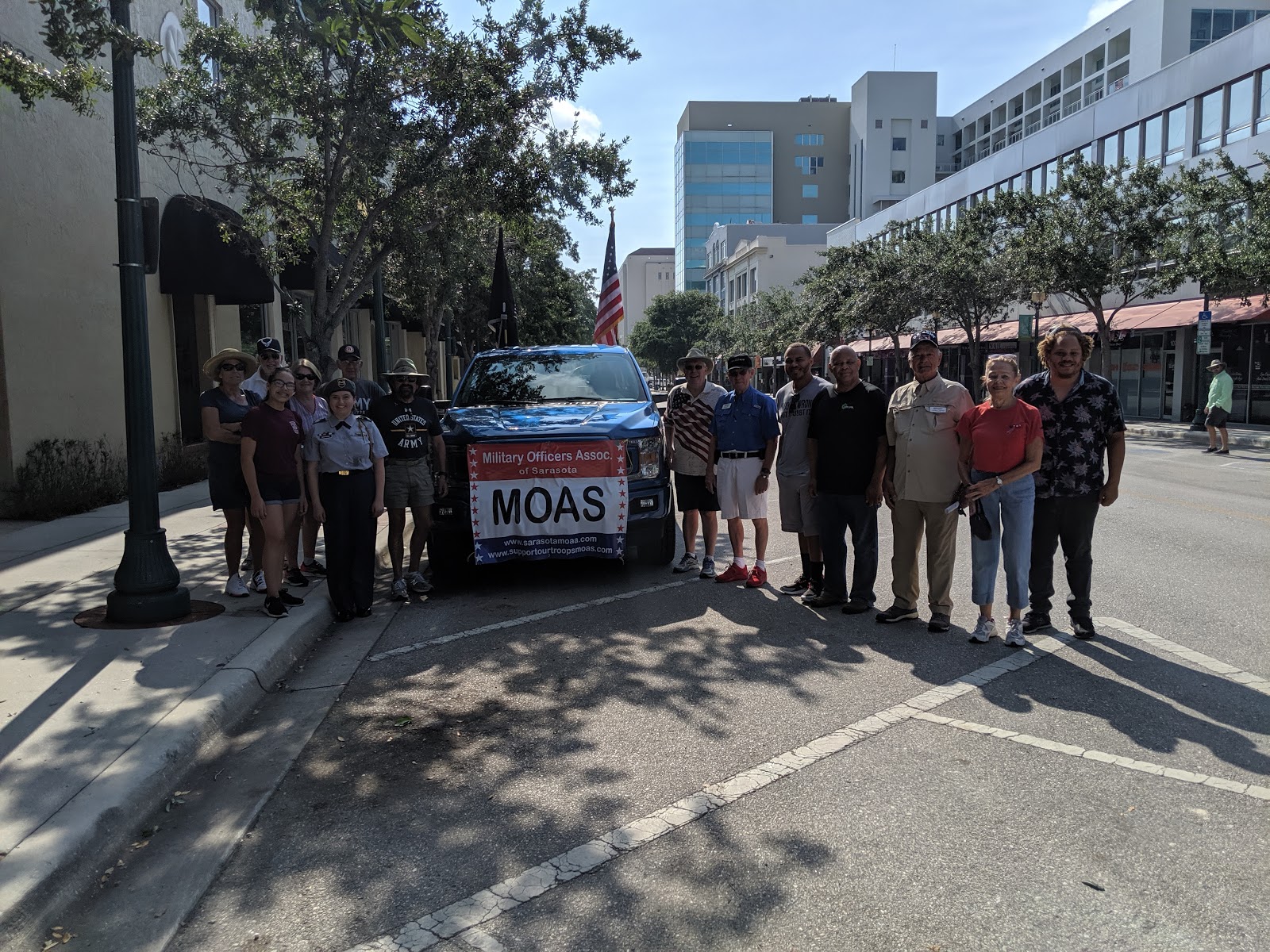 MOAS normally commemorates Memorial Day by marching in the parade in downtown Sarasota and distributing boxes for people to send to our troops serving in Afghanistan. Covid-19 has stopped the parade this year but not our memories and our thoughts honoring the men and women who died while serving in the U.S. military.

Memorial Day occurs on the last Monday of May each year. In 2020 it occurs on Monday, May 25.

Originally known as Decoration Day, it originated in the years following the Civil War and became an official federal holiday in 1971. Many Americans observe Memorial Day by visiting cemeteries or memorials, holding family gatherings and participating in parades. Unofficially, it marks the beginning of the summer season.

The Civil War, which ended in the spring of 1865, claimed more lives than any conflict in U.S. history and required the establishment of the country’s first national cemeteries. By the late 1860s, Americans in various towns and cities had begun holding springtime tributes to these countless fallen soldiers, decorating their graves with flowers and reciting prayers.

On May 5, 1868, General John A. Logan, leader of an organization for Northern Civil War veterans, called for a nationwide day of remembrance later that month. “The 30th of May, 1868, is designated for the purpose of strewing with flowers, or otherwise decorating the graves of comrades who died in defense of their country during the late rebellion, and whose bodies now lie in almost every city, village and hamlet churchyard in the land,” he proclaimed.

The date of Decoration Day, as he called it, was chosen because it wasn’t the anniversary of any particular battle.

On the first Decoration Day, General James Garfield made a speech at Arlington National Cemetery, and 5,000 participants decorated the graves of the 20,000 Union and Confederate soldiers buried there.

Many Northern states held similar commemorative events and reprised the tradition in subsequent years; by 1890 each one had made Decoration Day an official state holiday. Southern states, on the other hand, continued to honor their dead on separate days until after World War I.

Memorial Day, as Decoration Day gradually came to be known, originally honored only those lost while fighting in the Civil War. But during World War I the United States found itself embroiled in another major conflict, and the holiday evolved to commemorate American military personnel who died in all wars, including World War II, The Vietnam War, The Korean War and the wars in Iraq and Afghanistan.

For decades, Memorial Day continued to be observed on May 30, the date Logan had selected for the first Decoration Day. But in 1968 Congress passed the Uniform Monday Holiday Act, which established Memorial Day as the last Monday in May in order to create a three-day weekend for federal employees; the change went into effect in 1971. The same law also declared Memorial Day a federal holiday.

Cities and towns across the United States host Memorial Day parades each year, often incorporating military personnel and members of veterans’ organizations. Some of the largest parades take place in Chicago, New York and Washington, D.C.

Americans also observe Memorial Day by visiting cemeteries and memorials. Some people wear a red poppy in remembrance of those fallen in war—a tradition that began with a World War I poem. On a less somber note, many people take weekend trips or throw parties and barbecues on the holiday, perhaps because Memorial Day weekend—the long weekend comprising the Saturday and Sunday before Memorial Day and Memorial Day itself—unofficially marks the beginning of summer. 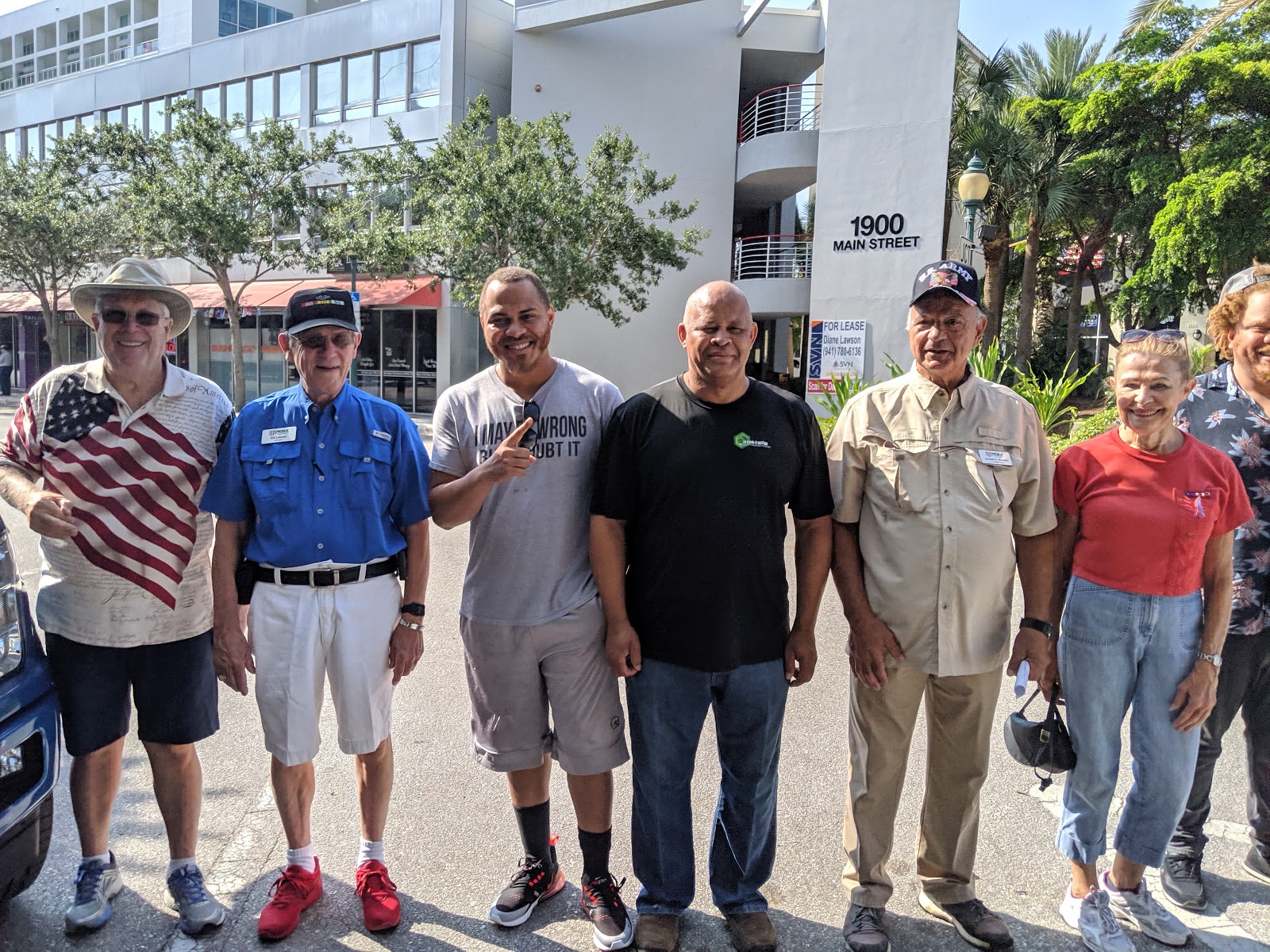 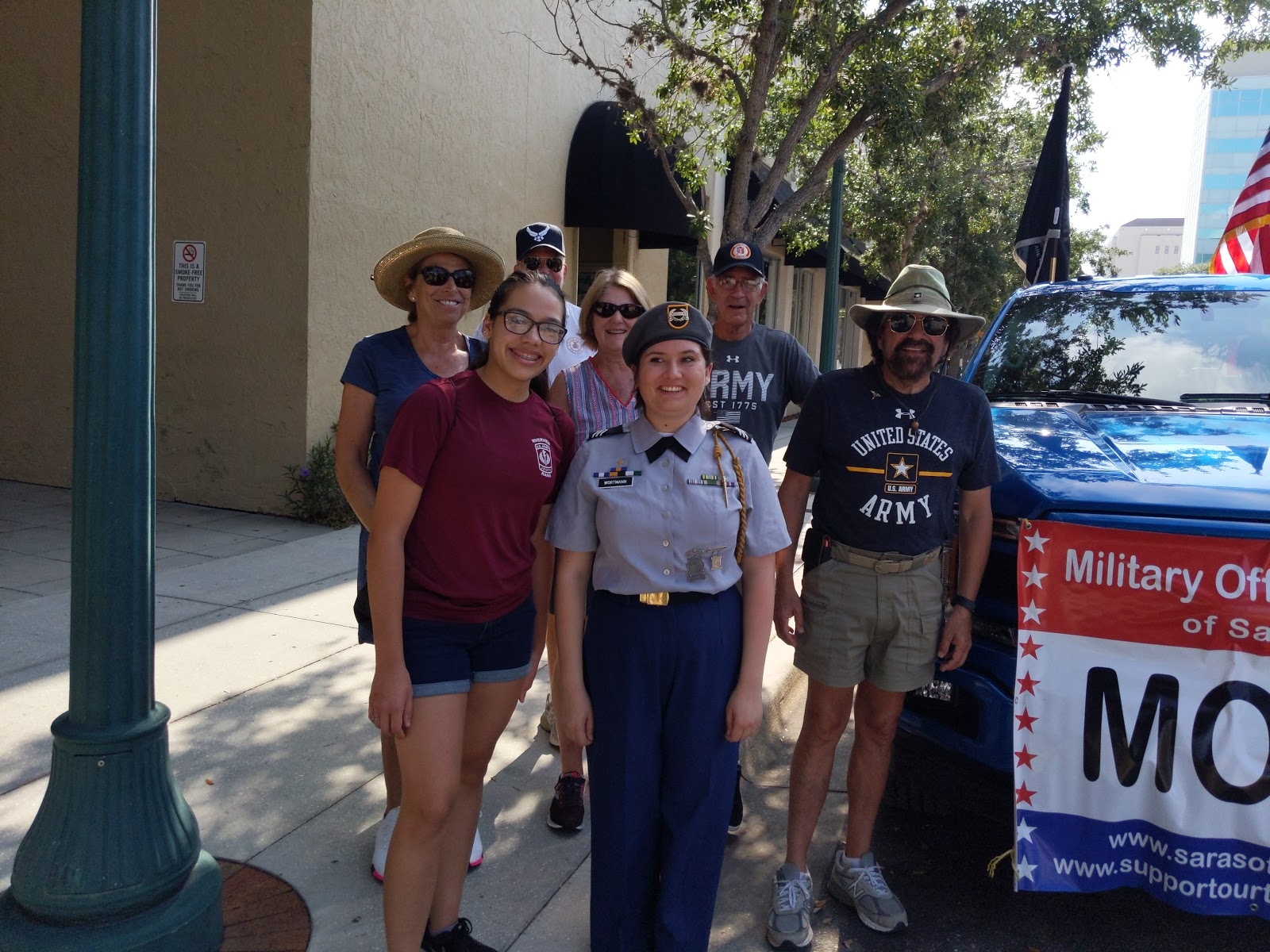 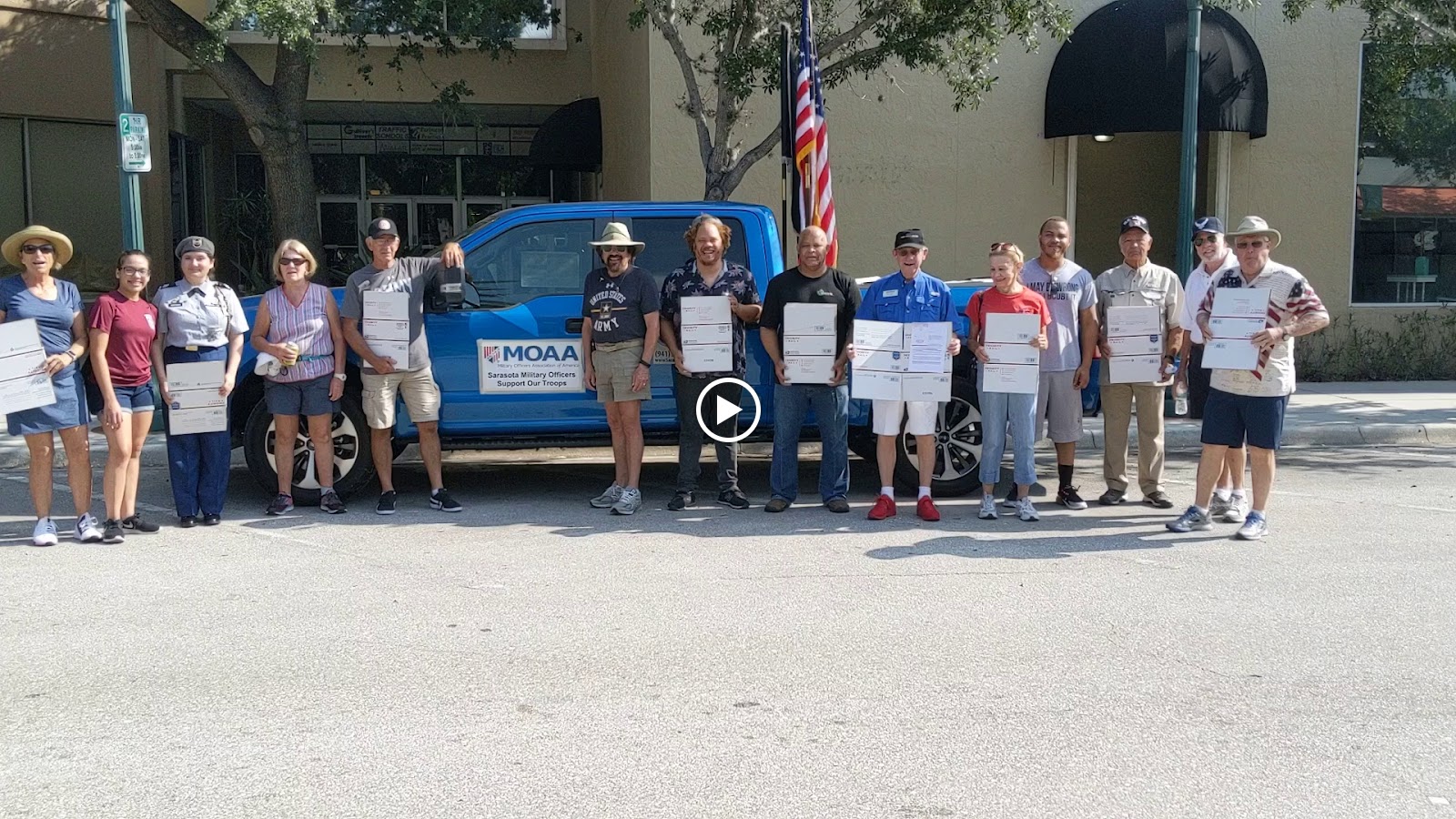 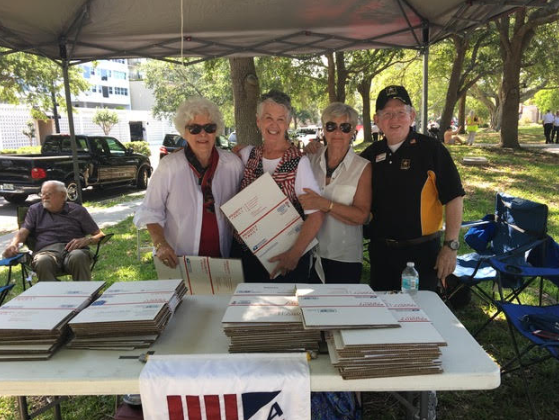 Memorial Day is almost upon us. This year is obviously not what we expected it to be. However, we still should thing about and give thanks to all our veterans at rest this Monday.

I thought many of you would also like to know the history of how "Taps" came to be. The origins of “Taps,” the distinctive bugle melody played at U.S. military funerals and memorials and as a lights-out signal to soldiers at night, date back to the American Civil War. In July 1862, U.S. General Daniel Butterfield and his brigade were camped at Harrison’s Landing, Virginia, recuperating after the Seven Days Battles near Richmond.

Dissatisfied with the standard bugle call employed by the Army to indicate to troops it was time to go to sleep, and thinking the call should sound more melodious, Butterfield reworked an existing bugle call used to signal the end of the day. After he had his brigade bugler, Private Oliver Wilcox Norton, play it for the men, buglers from other units became interested in the 24-note tune and it quickly spread throughout the Army, and even caught on with the Confederates.

Not long after Butterfield created “Taps,” it was played for the first time at a military funeral, for a Union cannoneer killed in action. The man’s commanding officer, Captain John Tidball, decided the bugle call would be safer than the traditional firing of three rifle volleys over the soldier’s grave, a move which couldn’t been confused by the nearby enemy as an attack.

As for the name “Taps,” the most likely explanation is that it comes from the fact that prior to Butterfield’s bugle call, the lights-out call was followed by three drum beats, dubbed the “Drum Taps,” as well as “The Taps” and then simply “Taps.” When Butterfield’s call replaced the drum beats, soldiers referred to it as “Taps,” although this was an unofficial moniker, according to “Taps” historian and bugle expert Jari Villanueva. He notes that Butterfield’s bugle call was officially known as “Extinguish Lights” in American military manuals until 1891. Since that time, “Taps” also has been a formally recognized part of U.S. military funerals.

Thank you all for your service and continued support. We look forward to honoring our veterans. Be safe, 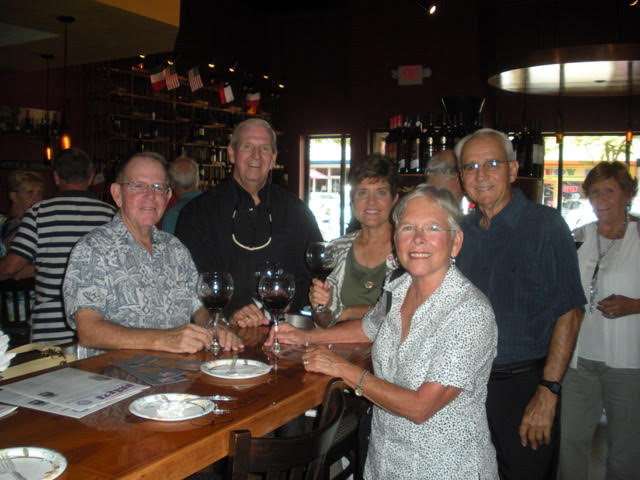 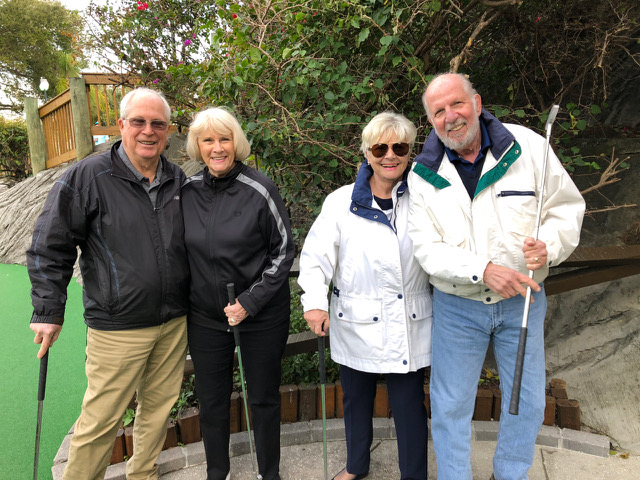 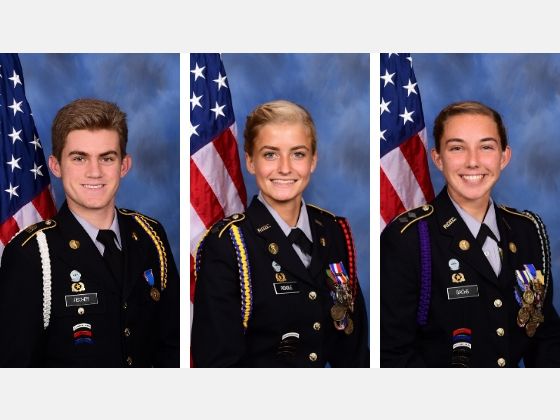 
“We are always positively overwhelmed by the quality of applicants who participate in our scholarship program. Although we are not able to host our annual banquet to recognize the incredible cadets receiving scholarships this year, we want to congratulate them for their hard work and successes,” said Claire Power, Director and Chair of the Sarasota Military Officers Foundation Scholarship Committee.
The applications were reviewed by the scholarship committee established by SMOF. 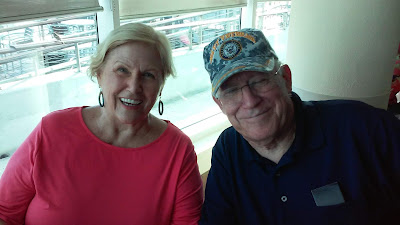 “Kay Tracy and her husband George volunteered as advocates with Guardian Ad Litem in Sarasota. Kay was a retired university professor, an incredible volunteer, a remarkable woman and a member of the scholarship committee for many years. Giving back to the community and creating opportunities for the next generation was one of her passions,” said Power.

“After Kay’s passing in 2019, the Board authorized the creation of this scholarship. We looked for an extraordinary applicant for this award, and found it in Aeryn Sachs. Congratulations to all of our scholarship recipients, we look forward to watching you continue to succeed and positively impact the world around you.”

In addition to creating scholarship opportunities for high school seniors and cadets in the community, the Sarasota Military Officers Foundation also donates to the State College of Florida Veterans program, the University of South Florida Veterans program and the Manatee Technical College East & West campuses Veterans programs. To learn more about the scholarships or the Sarasota Military Officers Foundation, contact Claire Power at bcpower@comcast.net  or visit https://www.sarasotamoaa.com/.

Established in 2000, The Sarasota Military Officers Foundation is a charitable organization administered by the Board of the Military Officers Association of Sarasota (MOAS). MOAS, through the Foundation, strives to be an active part of the Greater Sarasota area community by aiding, on an as-needed basis, those who have served their country, including active duty and veterans. The Foundation annually awards scholarships to deserving graduating Greater Sarasota area high school seniors, sponsors and supports high school JROTC programs, and sponsors and actively participates in a Support our Troops program. To learn more, visit https://www.sarasotamoaa.com/.

The Sarasota Breeze May 2020 Issue 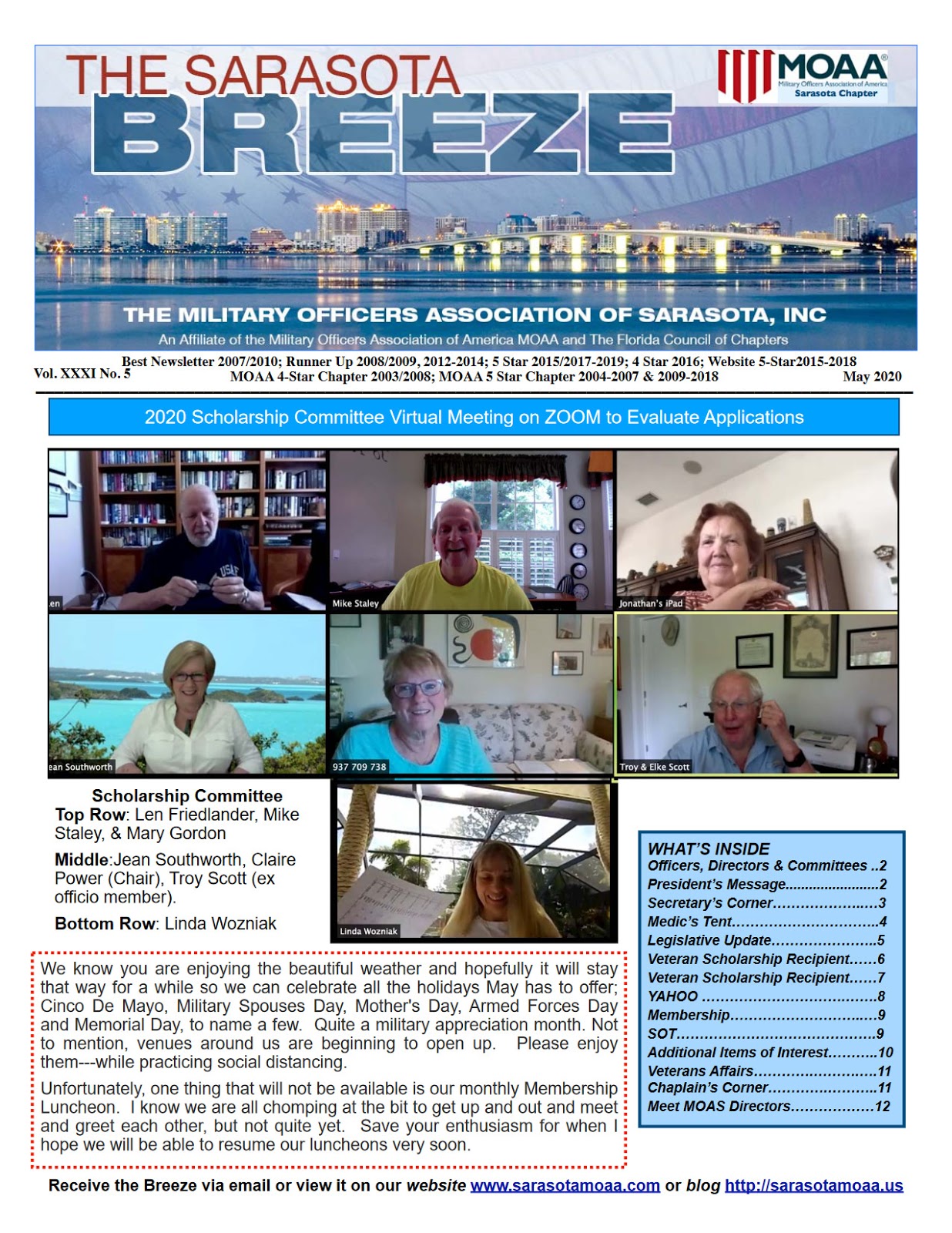 You can also view older issues of the Breeze 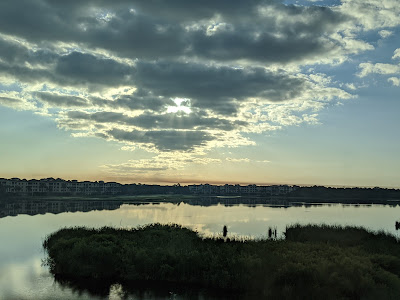 CANCELLATION ALERT – By vote of the MOAS Board of Directors, the 15 May MOAS Scholarship Luncheon with Jen Ahearn-Koch Sarasota Mayor & At Large Commissioner has been CANCELLED due to the COVID-19 pandemic.The Mayor has graciously agreed to be rescheduled for our 17 July luncheon.Arrangements are being made to deliver the 11 Sarasota Military Officers Foundation Scholarship winners their $2000.00 checks in May. See the May Sarasota Breeze for the names of the recipients.Thanks to Claire Powers and her Scholarship Committee of Len Friedlander, Mary Gordon, Mike Staley, Jean Southworth and Linda Wozniak for all the hours they put into the selection process.Depending on the Coronavirus pandemic situation, we hope to have our 19 June luncheon 1130-1330 at Michaels On East, 1212 S. East Avenue, Sarasota, FL 34239. The Guest Speaker is TBD.Also CANCELLED - The Wednesday 13 June No-cost Pre-Meet & Greet Pontoon Boat cruise on Sarasota Bay.However, our Wednesday 13 June Meet & Greet will come to all via ZOOM at 1700-1900.BYO food and drink, and enjoy the companionship of your fellow MOAS Members, and their significant others, at the MOAS Happy Hour in the virtual O Club. You cannot beat the cost and convenience, and no designated drivers are required.Click on the ZOOM link https://us04web.zoom.us/joinMeeting ID: 827 6266 8643Password: 010383This blast e-mail was sent by the direction of Troy Scott, MOAS President.Stay safe,MOAS Board of Directors