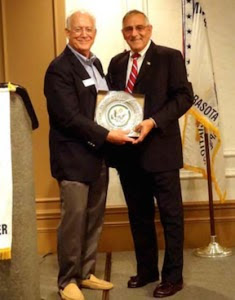 Southwest FL – Our speaker, Dr. Curtis L. Gilroy, opened with the following vignette; a Navy Captain on the bridge of a battleship sees a light in the distance. He orders the crew to signal the oncoming vessel to adjust course 10 degrees right (starboard for mariners).
The signal comes back, “No. You adjust your course 10 degrees.” The Captain, growing impatient, tells the crew to signal, “I am a Navy Captain, commanding a US Navy Battleship. Change your course!” The signal back says, “I am a Seaman 2d Class, commanding a lighthouse, the course change is up to you.”

This vignette illustrates the ongoing debate about service personnel costs and how to best manage them. In his presentation, Dr. Gilroy, explained that the 2016 National Defense Authorization Act (NDAA) includes major reforms to the retirement system for incoming accessions effective 1 January 2018. Other proposed changes resulting from the Military Compensation and Retirement Modernization Commission did not get a warm reception in Congress.

Dr. Gilroy is well qualified to speak on this topic, having served six Secretaries of Defense while in DoD, and was the official DoD spokesperson for our All-Volunteer Force.

Sticking with the vignette above, he also pointed out that the United States does not have a clearly defined strategy against which the personnel planners could predict future requirements and cost them effectively. The past 15 years of constant force employment is unprecedented, and, as usual, the 2016 budget is based on politically acceptable funds availability, not strategy.

Dr. Gilroy pointed out that MOAA is one of he most effective voices with the DoD and on Capitol Hill. It is clear that there will be changes to what most of us have known as the gold standard for retirement plans. What effects, if any, to the retired community are unknown at this point, but it bears close monitoring.

Finally, Dr. Gilroy fielded a few questions. BG Jim Hesson asked why the administration had selected such a small percentage of GDP (3.5%) to fund defense? Dr. Gilroy admitted that percent GDP was a flawed method to attain national security, but likely one that would satisfy the budget conservatives.

The same folks that have been working on personnel reform are now focused for 2016 on military health care reform. We should expect to be affected by that effort. Keep the MOAA Take Action icon on your desktop and communicate your concerns to your representatives often.

Dr. Gilroy’s slides have been posted to the MOAS blog:
MOAS is the Sarasota Chapter of Military Officers Association of America. MOAA is the nation’s largest and most influential association of military officers with 400,000 members. It is an independent, nonprofit, politically nonpartisan organization. For more information visit, www.sarasotamoaa.com Are you a former military officer? Please come and join us at our monthly luncheon.